According to a recent report from the American Association of Colleges and Universities, Louisiana is 1 of 7 states to reduce public spending on higher education. Joining Louisiana on this list is West Virginia, Wyoming, North Carolina, Kansas, Missouri, and Wisconsin.

Since Congress initiated the sequester in 2011, most states were forced to make budget cuts across the board, including dedicated funding for higher education. That trend, according to a recent post on NOLA.com | The Times Picayune, that trend is starting to reverse with most states increasing higher education funding in an attempt to offset recent cuts. New Hampshire, an outlier in the study, is leading the nation with a 28 percent increase in higher ed funding in 2013. The national average for 2013 was an increase in 2.9 percent.

2013 will continue a six-year trend of cuts to Louisiana's higher education system, with nearly $700 million cut from those allocations. And the most obvious impact of these cuts are the tuition increases at nearly every institution throughout the state, furthering the divide between those that can access a post-secondary education and those that cannot. However, lawmakers and administrators are hopeful that this trend in Louisiana is about to turn.


The state Board of Regents, the umbrella group overseeing the state's four public systems of higher learning, has requested an $87 million boost next year and State Rep. Steve Carter, R-Baton Rouge, who heads the House Committee on Education, is optimistic the tide has turned, and Louisiana higher education will be able to return to pre-recession funding levels soon.

However, not everyone is convinced that the study is worth noting. When contacted for comment, Gov. Bobby Jindal's spokesman critiqued the study for being too narrow, noting that the state has spent more than "33 other states per capita on higher education."


"When looking at total means of finance, spending for higher education has gone down by 4.6 percent, but at the same time, student outcomes are on the rise," Plotkin said via email. He cited increase in graduation rates at the state's two and four year institutions and noted LSU in particular marked an record high grad rate of 66.7 percent in 2012. 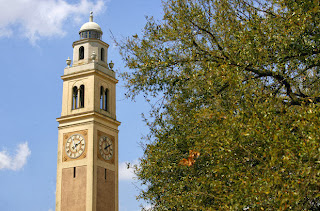 Joey Lehrman is a retired teacher with over 40 years of experience in the New Orleans public school system. Since retiring, he has transitioned to sharing his experience and perspective and all things New Orleans through a variety of blogs, news-sites, and social networks.